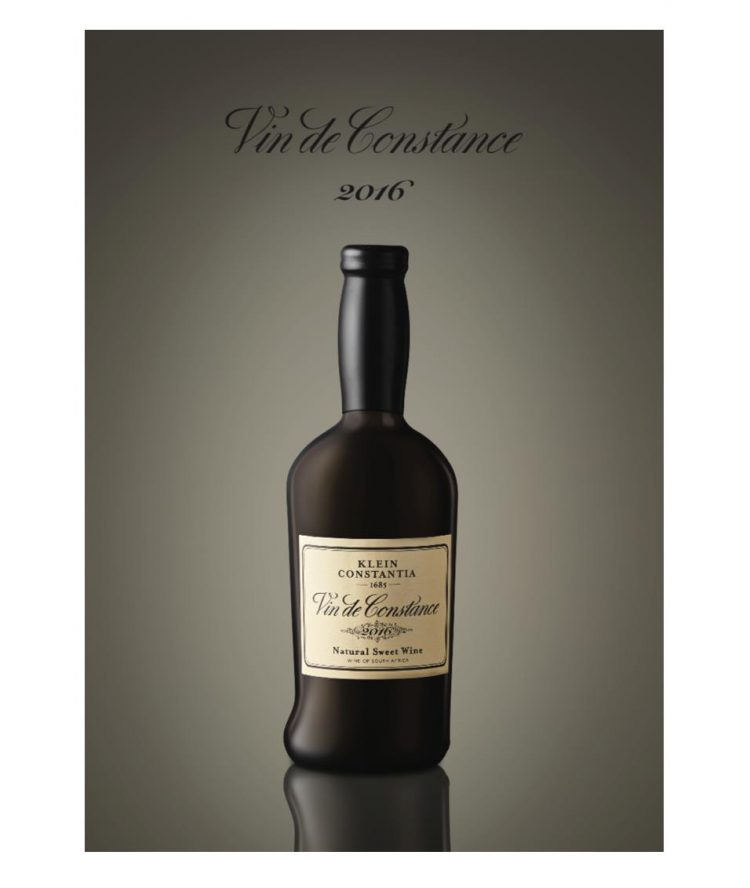 The 2016 vintage of Vin de Constance will be available through the négociant houses from 1 September 2019 – a significant milestone for the team at Klein Constantia who recognise it as an opportunity to strengthen the international visibility of their extraordinary wine.

Vin de Constance is a resurrection of the legendary Constantia wine that was enjoyed by many of history’s great personalities, among them Emperor Napoleon Bonaparte, who found comfort in up to a bottle daily while exiled on the island of St Helena. Since its re-introduction in 1986, Vin de Constance has consistently appeared on lists of the world’s top wines, acclaimed not only for its historical importance but also for its unique style and quality. “This new collaboration will further elevate its nobility” says Hans Astrom, Managing Director of Klein Constantia.

“In order to perpetuate the heritage of this incomparable South African gold, widely acknowledged as one of the greatest sweet wines in the world, and to help it continue to live and grow for hundreds of years more, we have undertaken to seek constantly for appropriate, balanced improvements while preserving the incomparable style of the Vin de Constance,” says Hubert de Boüard de Laforest, joint shareholder of Klein Constantia. “We now pursue this strategy of excellence in partnership with the CVBG, DUCLOT and JOANNE négociant houses.”

In the 18th and 19th centuries “the sweet luscious and excellent wine of Constantia” was recognised as one of the great wines of the world, savoured by royalty and given pride of place in the cellars of the world’s greatest wine collectors. Although production ceased during the mid-to-late 1800s, the legend lived on – immortalised in the poetry and prose of the great writers of the 18th and 19th centuries, from Austen to Dickens, from Dumas to Baudelaire. The wine also remained vibrantly alive – in old bottles discovered in some of Europe’s most famous cellars.

In the 1980s, during the redevelopment of Klein Constantia Estate (a sub-division of the original Constantia estate granted to Cape commander Simon van der Stel in 1685), everyone involved was inspired to resurrect the legendary wine. Early records were studied and careful selection made from vines which, in all likelihood, came from the original stock used in Constantia 300 years ago.

Over a century since its disappearance came the renaissance – Vin de Constance – a wine made in the style of the old Constantia, from vineyards celebrated since the late 1600s.

Since being re-introduced in 1986, after having been dormant for almost 100 years, Vin de Constance has again appeared on many lists as one of the world’s greatest wines. It is internationally recognised for its historical importance, origin, quality and unique style. In order to continue this iconic wine’s legacy and for it to be around for another 330 years we certainly do not want to alter this successful and unique wine style. However, it is our commitment to always seek for small but balanced improvements in areas that can further elevate the quality of this wine.

Vin de Constance is characteristically fresh, the perfect balance between sugar, acid and alcohol, while expressing the cool climate location and very specific soil types of Klein Constantia. Everything we do, from vineyard to bottle is done with this in mind. The 2016 vintage was earlier than anticipated due to El Niño which caused a very warm and dry spring and summer conditions. Despite being the second year of drought, the Constantia Valley had enough rain, safeguarding moisture in the root zone, unlike some warmer regions in the country. We are also protected from the extreme heat by our proximity to the ocean, experiencing predominantly cool night time temperatures allowing for the perfect raisining conditions for the quick development of sugar while retaining a good natural acidity.

Deeply complex and robust, the nose is layered with Seville orange marmalade, honeysuckle and ginger. Unctuously full bodied with intense flavours ranging from dried mango to fresh vanilla and lively citrus zest. These allow for the perfect balance on the palate, showing restrained concentration with a pithy astringency and a mouth-watering finish.

The 2016 vintage was earlier than anticipated due to El Niño causing a very warm and dry build up to harvest, resulting in faster ripening fruit to yield berries with concentrated flavours and well balanced acidity. With the renovated cellar, we could make use of dedicated tanks intended for perfect maceration and fermentation of the Muscat. Throughout the season we harvested in batches – from the riper berries that have great acidity to the raisins for sugar concentration. Each batch forms a unique component that is later blended together to create the perfect ratio between sugar, alcohol and acidity, allowing the wine to stop ferment naturally and without intervention.